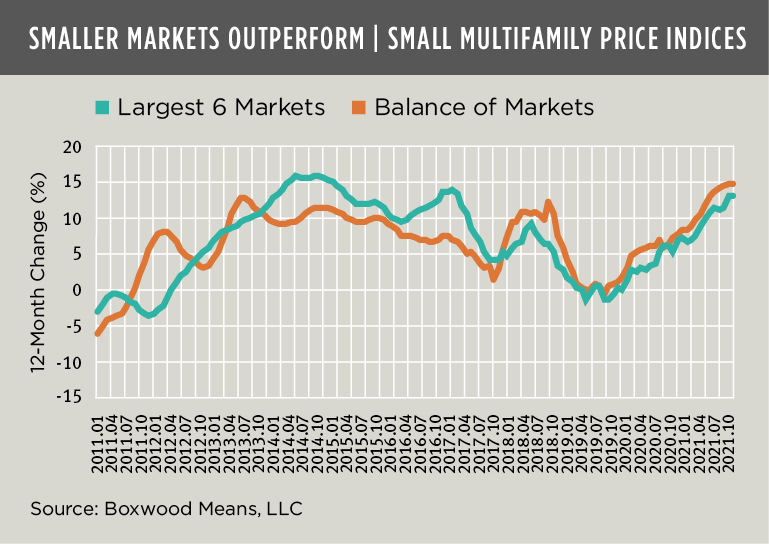 As the pandemic recedes in its depth and power, small multifamily markets have resumed price growth at an accelerated pace. The clear winners are smaller cities that are attractive havens for remote workers.

Soaring demand for market-rate apartments continues to be the decisive factor generally propelling prices upward. Last year’s total U.S. annual net absorption total of 673,000 units was the highest level in at least 30 years and increased the occupancy rate to another peak at 97.5% according to RealPage.

So, while the annual rate of small-cap multifamily price growth slowed to low single-digits during the early stages of the pandemic, asset prices came roaring back during the second half of last year on the heels of extended rental housing demand. Indeed, across 160 small multifamily markets in which Boxwood tracks property trades under $5 million in value, our National Small Multifamily Price Index (SMPI) increased to 13.9% YOY – the highest annual return since at least 2007.

As we similarly witnessed in the small commercial arena, smaller multifamily markets are outpacing the biggest metro areas. As the nearby graph illustrates, this price trend isn’t entirely new, i.e., secondary and tertiary multifamily markets have outperformed the six largest population centers for roughly four years running, capped by a whopping 12-month increase of 14.9% as of last November. In fact, the variance between these SMPI “Balance of Markets” and the largest metros is sizable, amounting to an average spread of 2.0% in annual price growth since 2018.

But especially among the smaller markets, the spike in prices last year reflects the broad impact that remote work among knowledge workers is having on demographic migration, household formations, and the restructuring of cities and the economy as a whole. By and large what smaller places have in common are relatively lower housing and other costs of living, and oftentimes attractive amenities like greater access to the outdoors, better walkability, and a more relaxed tempo than larger cities, among other benefits. Unsurprisingly then, smaller cities have produced high percentages of remote jobs as this LinkedIn article describes.

Tectonic shifts in how and where we live and work have created a housing boom in smaller metros, driving up home prices nearly everywhere. Given the nationwide constraints to affordable, rental housing supply, the amplification of multifamily prices in smaller markets should have been predictable. In the short run at least, we expect the out-migration to, and remote work within smaller, less costly communities to persist. Why? Because we believe the pandemic, among other consequences, has unintentionally awakened many white-collar employees and families to the benefits of a better work-life balance especially in distant cities.