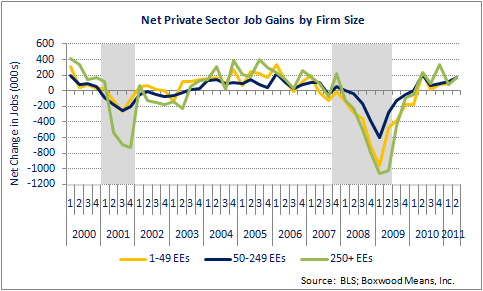 The latest private-sector employment growth data from the Bureau of Labor Statistics seems to suggest the economic tide continues to turn – albeit slowly. Perhaps more revealing for investors and lenders in the small-balance commercial space is that BLS’s recently released, mid-2011 data provides solid evidence that small businesses across the country are augmenting their payrolls.

While the BLS data isn’t as up-to-date as decision-makers might prefer, it’s pretty clear that small business employment gains outpaced the big-business sector (250-plus employees) during the first half of last year. And companies with fewer than 50 employees weren’t all that far behind the mid-sized group, which the BLS defines as firms with 50 to 249 employees.

Net employment gains among small businesses outpaced the biggest firms by roughly 10,000 employees during each of the first and second quarters. The 49-and-under firms added a net 95,000 new hires during the first period (compared to 85,000 for the largest companies), and by a more encouraging 174,000 during the second (compared to 165,000 for the 250-plus companies).

The overall nationwide figures demonstrate a predictably erratic recovery over the last four quarters for which BLS has reported data – but at least gross gains in jobs exceeded gross losses throughout.

The data also indicate that mid-sized companies can generally boast greater job-generating momentum than either large or small firms – as measured by the respective net gain’s proportion of each category’s overall employment.

The mid-tier sector’s second-quarter gains represented a 0.9 percent expansion of the category’s aggregate employment – following the first quarter’s respectable 0.6 percent gain. The small-business sector lagged a bit behind, with the second-quarter’s net gain amounting to 0.5 percent of the category’s overall employment, following a decent 0.4 percent during the previous quarter.

Just eight states experienced net private employment losses during the second quarter of last year. The period’s state-by-state performances don’t appear to reveal any strong regional trends – although it’s perhaps worth noting that four states that experienced dramatic cyclical bubbles and busts all ranked among the top-15 in terms of net gain as a percentage of employment: Florida, Arizona, California, Nevada.

More recently in the aggregate, the domestic economy appears to be growing at a somewhat stronger pace, adding an average of about 245,000 new jobs monthly since December. And the consensus appears to be that small (especially) and mid-sized firms continue doing the bulk of the hiring.

For example, according to the latest ADP National Employment Report businesses with one to 49 employees hit six figures with 100,000 jobs added in March on a seasonally adjusted basis. Payrolls at mid-sized companies (50 to 499 employees) swelled by 87,000, with employment at larger companies growing by 22,000.

In February the small-business sector accounted for half of the net employment gain of 230,000 – with mid-sized firms representing roughly 40 percent of the growth and larger companies again running a distant third.

Meanwhile, more active hiring days appear to lie ahead even for big businesses. Among members of the Business Roundtable – essentially leaders at the nation’s 200 biggest companies – 42 percent of CEOs expect to be hiring over the coming two quarters. That’s a welcome gain over the 35 percent recorded three months back.

More than 80 percent expect stronger revenues, and nearly half plan to boost capital expenditures – which will certainly help the employment picture at some of their small-business suppliers.