The pandemic was a hurricane of sudden, widespread chaos and devastation for small businesses and civic life. The toll from the emerging economic storm is still unpredictable. But the latest market data indicates that the current stability of small-cap commercial real estate leasing conditions may be at risk.

Here are the major takeaways from Boxwood’s analysis of a custom extract of Q3 CoStar leasing market data comprising office, industrial and retail properties under 50,000 sq. ft. and multifamily buildings between 5-40 units. 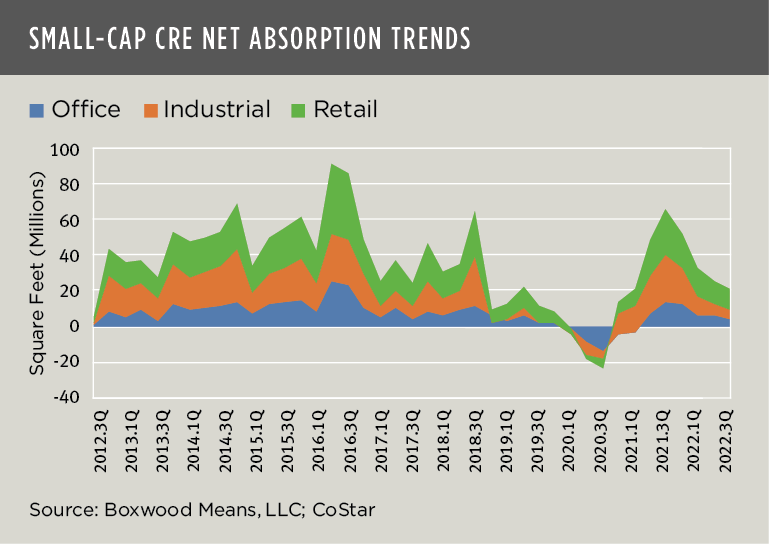 Office – The national office vacancy rate ticked down 10 bps to 6.4%, within earshot of the record low of 6.1% and comfortably 120 bps below the 10-year average which may allay some fears that the sector was about to tank amid the self-sustaining WFH era. What is a bit surprising is the relative stability of small office building fundamentals, i.e., we hear a lot about how smaller office properties will suffer from tenant migrations to bigger, higher-amenity office locations. That has yet to show up in the national numbers. That said, office demand has weakened: Net positive absorption declined to only 3.9 million sq.ft., off 36.7% sequentially and a notable 71.9% YOY as the total number of newly signed leases (13,240) dropped to the lowest total in eight quarters.

Industrial – Vacancies for small industrial and flex buildings were unchanged at 2.9% for the third consecutive quarter, holding firm at its historically low point. Occupancy gains slowed to just 5.4 million sq. ft., down 12.1% from Q2 and a sizable 79.8% from 12 months earlier when nearly 27 million sq. ft. were absorbed. Importantly, the roughly 8,100 leases signed during Q3 were the lowest total in 15 years, reflecting in part the weaker demand for goods in the manufacturing sector and slowing business investment cited in the latest ISM Report.

Retail – The national retail vacancy rate for small retail and strip centers, and freestanding retail stores held steady at a record low of 3.6%. Demand remained in positive territory with 11.9 million sq. ft. of gains in net occupancy, but here, too, there was diminished tenant demand: Net absorption declined 10.7% sequentially and 53.4% YOY. Consumers boosted their spending in stores during August suggesting that some household resilience remains despite slowing wage growth, higher prices, and soaring interest rates.

The continuing slowdown in across-the-board leasing velocity reflects mounting concerns among small businesses that economic conditions will get worse before they get better. The Federal Reserve appears hellbent on taming the inflation tiger, and the current regime of interest rate hikes has taken the air out of the proverbial balloon, has raised market risks, and may level potentially punishing effects on all commercial real estate market participants.