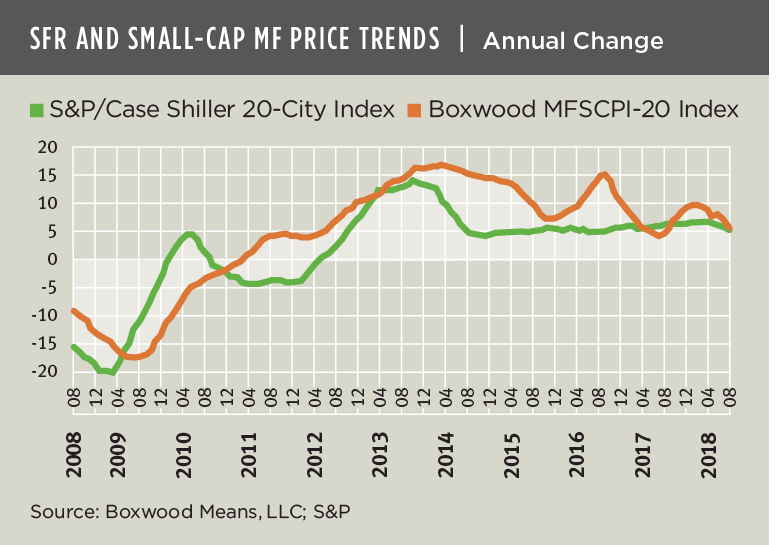 The feeding frenzy for small apartment assets that catapulted prices to record highs may soon be over. Small-cap multifamily prices continued to rise in September and now exceed the previous 2006 peak level by more than 40% according to Boxwood's research. But price growth has fallen off considerably, dropping to a range of single-digit, annual increases nearly on par with a decelerating single-family residential (SFR) housing market. As the real estate markets soon enter a ninth year of expansion, these parallel price trends bear watching.

The nearby graph illustrates the composite price trends for 20 small-cap multifamily and SFR markets. Price gains for small multifamily properties declined for the sixth consecutive month to an annualized rate of 5.6% that, while still healthy, is the smallest gain in nearly a year and roughly a third of the annual return recorded during the big bulge period between late 2013 and early 20151.

The retreat in price growth among the six largest U.S. population centers, to only 3.4% YoY, is a contributing factor in the overall pullback. Meanwhile, secondary and tertiary markets have recently outperformed with an increase of 7.5% over 12 months. Clearly, peak prices especially in major metro areas coupled with higher financing costs have finally created enough friction to seemingly becalm small-time investors.

What remains to be seen is how much slowing SFR housing market trends might influence investors in the small-cap space. Sales of new and existing SFR homes hit an apex during November of last year, and sales of existing homes have declined 9.3% since that time according to S&P. This lower sales activity, fueled by low inventory, higher mortgage rates and home prices that have lept beyond, and become untethered to growth in personal incomes, underlines the weakening trend that has shaved annual SFR price growth to 5.1% in September – the smallest 12-month gain in nearly two years.

On the one hand, the home sales slump and gap between personal income and home prices bolster the small-cap multifamily investment market as many frustrated, would-be home buyers (including millennials) have resorted to rental housing. Also, the small multifamily market is buttressed by the perpetual scarcity of affordable rental apartments.

On the other hand, we can't forget the sizable impact of housing on the broader economy—and CRE. Aside from its fundamental impact on GDP via residential investment (which has been declining), housing represents the No. 1 source of wealth for most families. When housing prices markedly move up or down, they tend to cause big-time shifts in buying behavior that have historically been a major factor leading to housing booms and busts.

As we've indicated in the past, the historical price performance between housing and small-cap CRE markets has been closely aligned. Here, the SFR and small-cap multifamily price trends have a positive correlation of .70. And while small-cap multifamily prices lagged SFR prices by roughly six months during a strong price inflation phase that ended in 2015, since then that lag effect has altogether disappeared. That means the price movements between the two markets are less tied together, and only time will tell if that relationship resurfaces.

This disconnect may be good news for small-cap multifamily investors in the short term. But if the housing market continues to fall, it's broad economic impact may yet trigger a further pullback in prices for small apartment assets (and small-cap CRE in general) in the coming months and year.

1 The price performance of these 20 markets, comprised of primary and some secondary markets where prices historically have tended to be relatively more volatile (e.g., Las Vegas, Seattle, San Francisco and Miami among others), differ slightly from Boxwood’s multifamily national index that has proven to be a bit more stable over time.