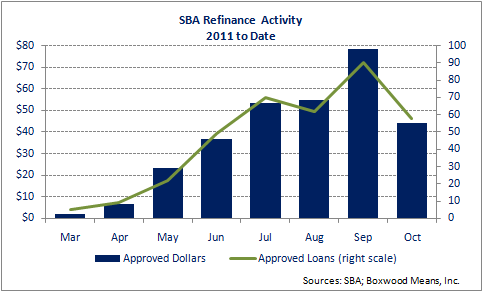 More particularly, the Act included a two-year provision through which the Small Business Administration would guarantee repayment of much of the refinanced debt secured by owner-occupied properties - thereby encouraging senior lenders to participate in refi transactions. The provision essentially expands the popular SBA 504 owner-occupied property finance program to allow for commercial mortgage refinancing - rather than just for property acquisitions and improvements.

Given the huge concerns over sticky credit conditions and under-water mortgages, it wasn't such a great leap for SBA program administrators at the time to estimate that as many as 8,000 business owners would tap into the program. The Act in fact authorized as much as $7.5 billion in 504 refi-related guarantees without actually tapping new taxpayer subsidies (i.e., program fees are expected to cover costs).

So far: well, not so good. Eight months after the SBA started taking applications for the program (which is set to end next Sept. 27), administrators have approved just $300 million in loan guarantees. Factoring in the non-guaranteed senior tranches of the approved loans, we're talking about well under $700 million in total transactions supported through the program to date.

With economic conditions across the country still fragile and uneven, it's probably not shocking news that borrower demand for refinance dollars remains weaker than had been anticipated a year back. But another key factor in the slow start is that far fewer interested borrowers actually qualified for the refi program than SBA officials had estimated.

Whichever explanation is the more viable - and in reality it's probably a combination of both - chances are participation will expand notably in coming months. That's because program decision-makers opted for some significant adjustments expanding eligibility as they compiled the program's final rules that went into effect a month ago.

The tweaks boosted the dollar amounts available for some borrowers; expanded eligibility to borrowers that had modified to-be-refinanced loans; and loosened rigidity of the 504 program's traditional 50/40/10 capitalization structure.

(Many SmallBalance.com readers will recall that the 504 program entails: a property-secured bank-funded tranche at 50 percent loan-to-value ratio; a 40 percent subordinate tranche provided by a qualified non-profit Certified Development Co. [and pooled into SBA-guaranteed debentures]; and 10 percent borrower equity. Borrowers need to occupy at least 51 percent of the collateral property; maximum guaranteed amounts can run to $5.5 million.)

The general problem has been that the program's initial interim rules simply "screwed down the lid too tightly" with respect to the roster of potentially eligible borrowers, says Merril Levesque, outreach director with the National Association of Development Cos. (NADCO), an organization of CDCs.

But Levesque gives administrators credit for seeking additional feedback from CDCs, bankers and small-business owners - and adjusting the interim rules initially in April, and then again with the final rules that went into effect Oct. 5. There's little doubt participation will expand substantially through the end of the year and into 2012, she adds.

Considering that SBA didn't start accepting applications until the last day of February, administrators likely didn't have great expectations for March. But after that month saw just a handful of refinance applications approved - totaling barely $2 million in guaranteed debt - program decision-makers approved an adjustment aimed at boosting eligibility the first week of April.

The interim rules restricted eligibility to borrowers facing maturities scheduled by the end of 2012. So after the slow March, administrators threw out the maturity-date provision to open eligibility to any otherwise qualifying mortgage funded at least two years before application.

But even that enhancement didn't exactly inspire a surge in applications. Just nine 504 refis were approved in early-April - although the average guaranteed amount was higher at well over $700,000.

As administrators considered additional adjustments, volume generally improved steadily over the following several months, with September approvals approaching $80 million spread among 90 loans. Monthly approvals have averaged 66 since June - or a bit over two a day on the average.

One of the October enhancements boosts potential overall (bank and SBA combined): i.e., new loan proceeds are increased to 90 percent of the property's current appraised value - rather than simply the amount of the existing debt being refinanced.

That enhancement is particularly attractive for small business owners with equity tied up in owner-user properties subject to existing mortgages that don't mature for some time - and which really can't be refinanced through other available lending programs at attractive rates and terms today, Levesque stresses.

"For owners who clearly have equity in their properties, this is a really good program for accessing it" and reinvesting it into job-creating operations, she elaborates.

Another change boosted eligibility by loosening up the program's previously more restrictive requirement that mortgages have to be "current" to qualify for refinancing. Whereas initially this entailed not having any payments 30 days late within the previous year based on the original loan terms, the rules were, ahem, modified to account for any loan modifications.

"So now you're not automatically disqualified if there's been a workout - as long as you've been current for the past year" based on updated obligations, Levesque explains.

Yet another arguably minor, yet potentially significant, enhancement: the senior lender doesn't necessarily have to loan a principal amount equating to half the collateral's value: the amount just needs to be equal to or greater than the guaranteed 40 percent tranche. Hence if a 40 or 45 percent senior loan provides sufficient proceeds, the borrower's blended cost of funds will be less than at the full 50 percent.

NADCO also calculates that 20-year effective rates for the refi program equated to roughly 5 to 5.5 percent, depending on fee structure, during October. For the calendar year through last month, overall approvals of the guaranteed components of refi transactions total $300 million, with the average guaranteed tranche at $821,000.

Still, the potential volume-boosting effects of the adjustments didn't exactly soar in October. Approvals totaled just 58 loans for a bit over $44.3 million in guaranteed debt - the slowest month since June's 49 loans totaling $36.7 million. But given that the final rules have just been in effect for just four weeks, approvals over the coming couple of months should provide a better read on their true impact on application volume.