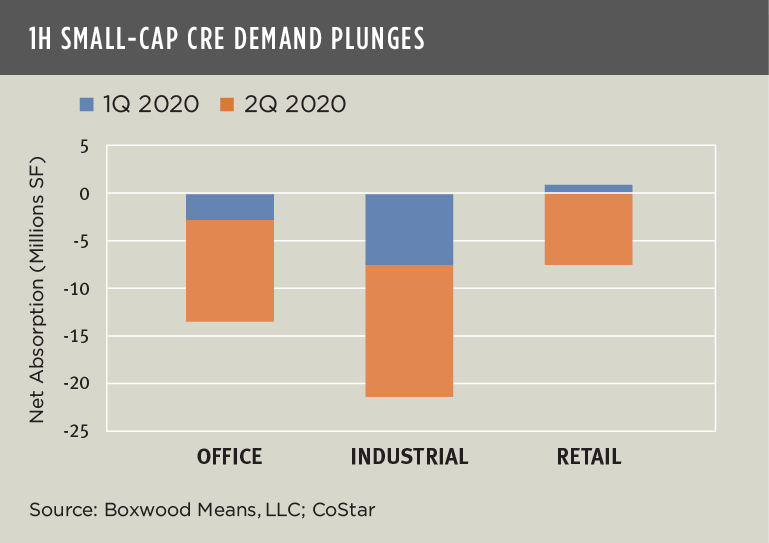 The massive losses of Main Street jobs and commerce since late March sent a shock wave through the small-cap CRE market with devastating Q2 results that underscore the unique vulnerabilities of small businesses to Covid-19 and related shutdown orders.

We are experiencing the worst recession in history, and small businesses that typically own or occupy small warehouse and light industrial facilities, modest office buildings and various retail locations among other uses, are shouldering the full weight of the economic catastrophe. 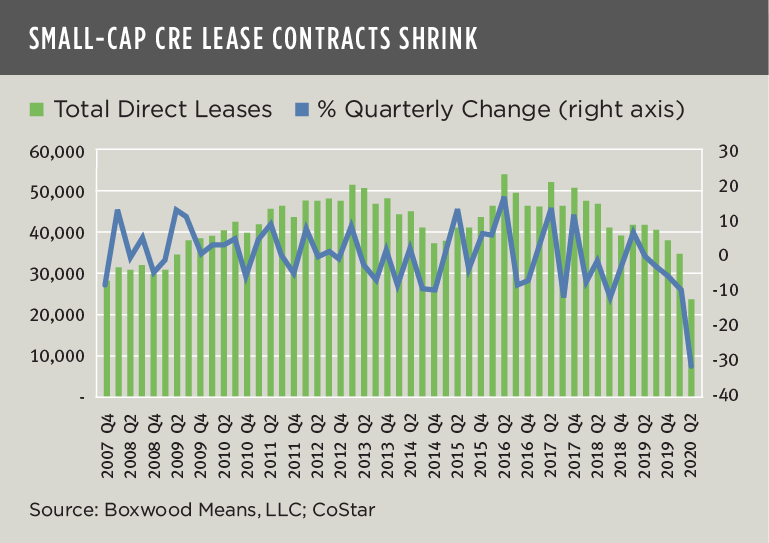 The colossal impact of the pandemic on small business real estate reflects its greater risks attendant to short term leases, small tenants with potential cash flow problems, and the (lower) quality or competitiveness of these assets among other considerations. By contrast, the higher proportion of institutional quality and/or national tenants that tend to occupy superior buildings has resulted in relatively more stable space market fundamentals in the general CRE market. For example, while leasing demand plummeted YoY across the board for general retail (-94.8%), office (-75.4%) and industrial (-26.9%), net absorption nevertheless remained positive for all three sectors, led by gains of nearly 150 million sq. ft. of industrial space according to CoStar data. Also, and not surprisingly given Covid-19’s disproportionate impact on consumers’ changing buying behavior, retail’s Q2 positive net absorption amounted to a nominal 2.5 million sq. ft.

As these latest market trends bear out, the substantial bifurcation in the well-being of small- and large-cap CRE markets is discernable and growing. Recent outbreaks of infection in different parts of the country tragically loom as a major threat to the nation’s economic recovery generally and, more specifically, to the long-term health of small-cap CRE and its property owners, investors and tenants across a broad spectrum of occupant uses. It seems increasingly vital for Congress to come together and pass additional relief measures very soon or else likely witness further distress for legions of small businesses and unemployed workers.