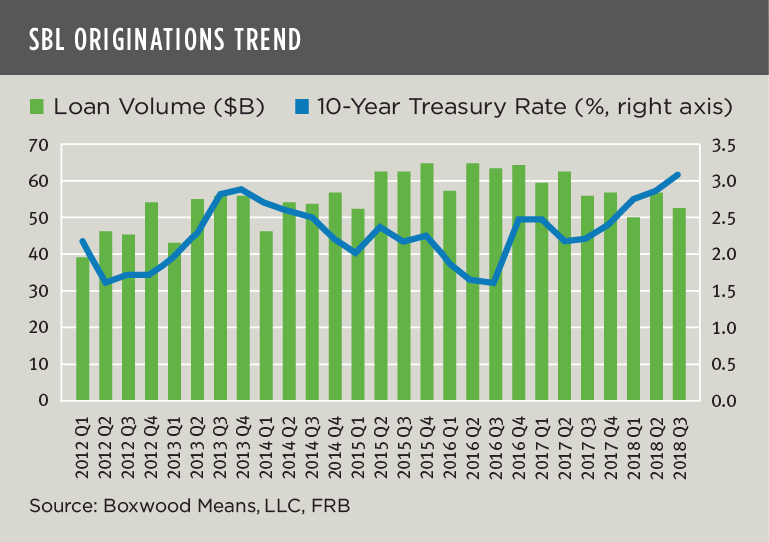 Small-balance loan volume was roughly on trend during Q3 of last year according to our latest research. Even so, a rising interest rate environment has slowed both investment property sales and purchase loan activity. And as discussed further below, if past is prologue the combination of lower deal volume and heightened competition among lenders late in the credit cycle will likely produce some fallout among a number of players in the SBL space.

In the short term, the market for commercial and multifamily loans under $5 million remained robust with Q3 volume of $52.5 billion exceeding the $50 billion level for the 17th consecutive quarter dating to 2014. That said, volume dipped 5.2% and 7.9% for the quarter and YoY, respectively. The $160.1 billion of closed loans through three quarters likely ensures a sixth consecutive year of volume above $200 billion, but with interest rates heading higher the 2018 total isn’t likely to rival the $232.7 billion from 2017 nor the record $248.7 billion registered two years ago. (See the nearby graph.)

Indeed, higher financing costs have already changed the composition of loan originations. Refinance loans, which accounted for 62% of total SBL originations, rose slightly by 1.7% YoY as borrowers sought to lock in favorable rates before they moved higher. Meanwhile, purchase loans (38%) dropped by a sizable 14.7% YoY as sales transactions flattened in the second half of the year in part because of thinner cap rate spreads. 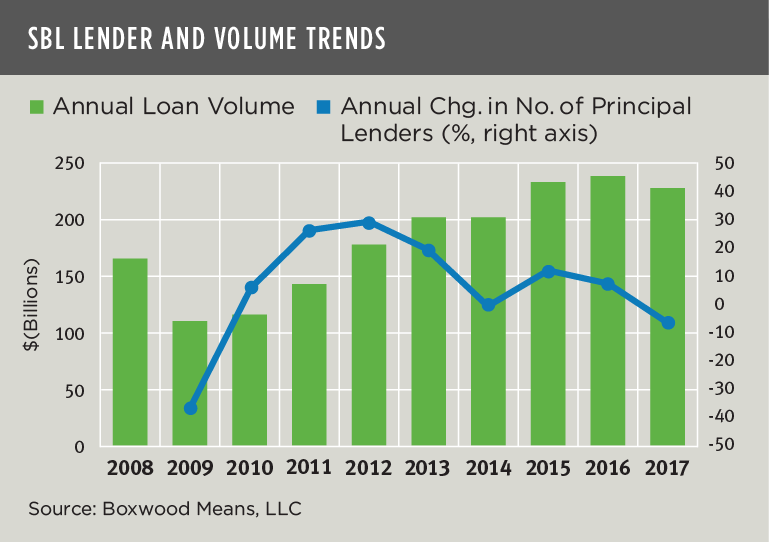 If SBL production continues to slow or experience a cyclical decline, our historical research suggests that it will signal bad news for some portion of lenders in the space. As shown in the second graph, the rate of growth in the number of principal lenders (defined here as lenders with a minimum of $50 million in annual SBL originations) closely followed the trajectory of changes in SBL deal volume over time. That is, the number of lenders ebbed and flowed with the market’s growth. In fact, there was a near perfect correlation of .997 between the number of lender firms and debt volume over the 10-year period.

It’s apparent that immediately following the last upcycle that ended in 2008, many lenders either under-produced or exited the SBL space outright in the wake of the financial crisis. Later when the market began to swell, some firms raced back in and others joined as wholly new entrants. In effect, a positive feedback loop developed between lenders and the market’s expanding opportunities.

It's been a great run for SBL lenders over at least the last six years. Yet clearly, it’s a loan market with cyclical fluctuation. What this intrinsic feedback loop portends is not only increased competition for fewer loans, but also challenges to staying power – if not a complete reversal of fortune – for some percentage of lenders as deal volume inevitably declines. It’s imperative that principal lenders gain scale, and the risk management and innovation capacity to withstand the next downturn and compete long term.