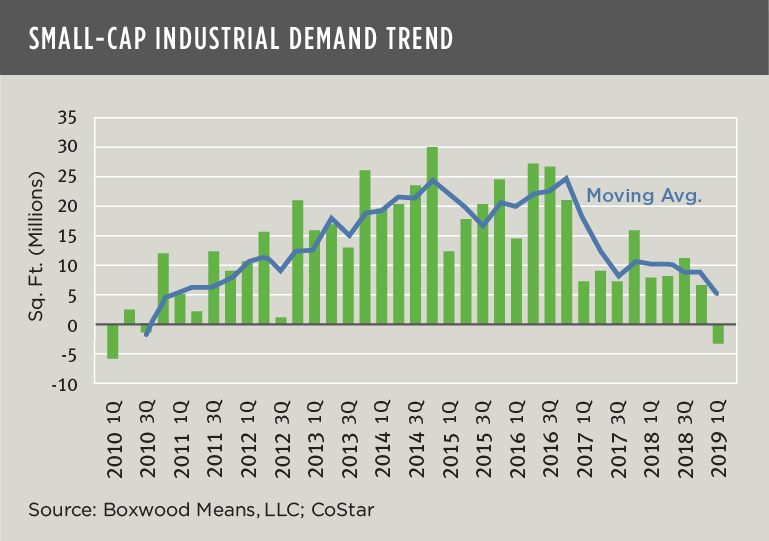 Most mainstream views on CRE investment and space market fundamentals remain upbeat nearly half-way into the year. The blue-skies outlook is framed by rosy U.S. economic headlines and a top-down assessment of the general CRE market punctuated by heroic large deal activity monitored most heavily by the industry press. However, clouds are gathering when it comes to the small-cap CRE market.

Chief among the concerns are the unprecedented and intertwined trends between the scarcity of small-cap leasing availabilities and qualified new workers for small businesses. As Boxwood's latest Small Balance Advocate report describes, Q1 aggregate demand tumbled by about 90% across office, industrial and retail sectors from the previous quarter and YoY to the lowest quarterly net absorption in over 30 quarters. Moreover, industrial demand turned negative for the first time since 2010 with net occupancy losses of a whopping 150% sequentially and 140% YoY (see the nearby graph).

The irony behind this slackening demand is that the trend doesn't reflect a loss of tenant appetite for new facilities or expansion space. Instead, it's a supply-side issue, i.e., cumulative additions of new commercial product during the market's expansion have insufficiently kept pace with surges in demand. National vacancies are thus at near record lows. The extremely tight space conditions are exacerbated in the urban core by the enduring back-to-the-city movement where small firms with talented, highly paid workers confront slim leasing availabilities, while the needs for in-fill warehouse and distribution facilities supporting urban consumers are also difficult to satisfy. 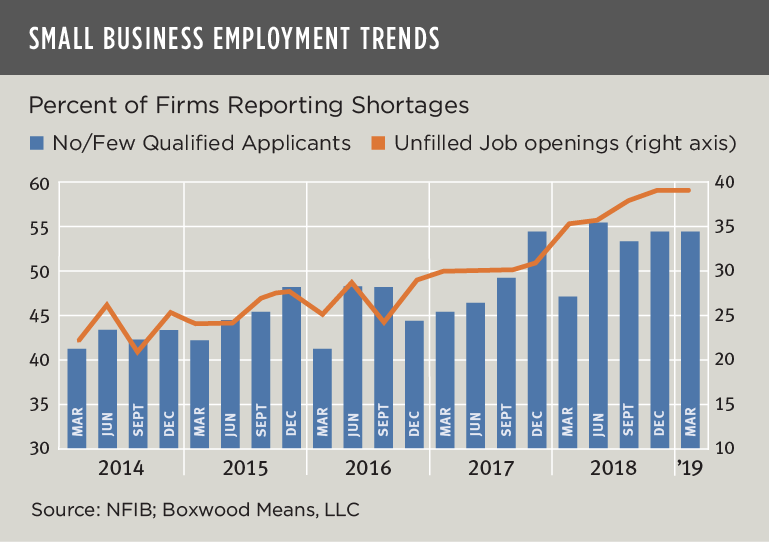 But then couple the adverse impact of inelastic market supply along with record-low national unemployment, and we have a double-barreled problem at hand. The fact is that small businesses are unable to find qualified new workers that would fuel growth and facility expansions. NFIB's March Small Business Economic Trends report showed that 54% of small business owners (and 90% of those in hiring mode) cited few or no qualified workers for open positions. And 39% of all owners – equal to a record high figure – could not fill job openings in the latest period. As a result, historically low unemployment rates have inadvertently become a major factor in the pullback in space demand.

Solid U.S. jobs and GDP growth suggest a clear runway lies ahead for a sustained CRE market expansion. And while the supply-demand gaps in both employment and the space markets may not pose major disruptions to the market's current stability, the weight of these factors is substantial and will likely create more friction over time.