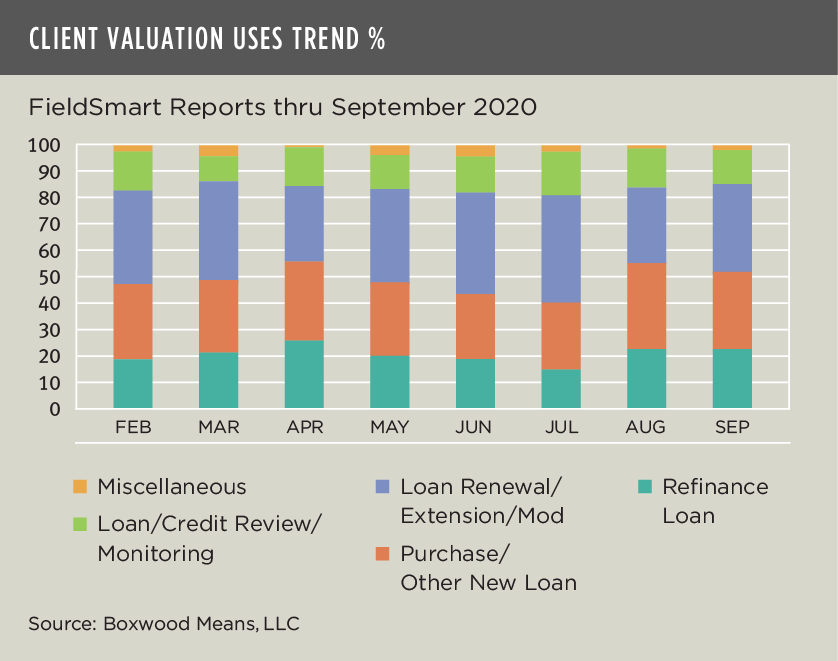 Despite the ongoing recession, small businesses offered hints of economic promise and revitalization according to Boxwood’s latest data on FieldSmart Evaluations and Restricted Appraisals procured by bank clients for valuing small-balance loan collateral.

Loan originations during September exceeded 50% of all client valuation uses of FieldSmart reports for the second consecutive month and the first period since April when economic dislocations began to snowball.

The new small-balance commercial loan activity correlates with similar evidence of green shoots for the Main Street economy. For example, the Paychex/HIS Markit Small Business Jobs Index rose 0.06 percent in September for the first increase since May. In addition, the NFIB also reported last month that an increasing majority of small business owners were hiring or trying to hire new workers compared with previous periods.

Key takeaways from our September procurement data include:

We might anticipate that valuation uses associated with monitoring, and problem or delinquent loans might have surfaced during September (or earlier) as the recession grew and bank forbearance periods expired. Yet uses of Boxwood’s FieldSmart Evaluation and FieldSmart Restricted Appraisals have tended to shade away from problematic or at-risk collateral during the pandemic, i.e., leisure, hospitality, and larger shopping centers, which likely explains why no higher incidence of troubled loans has emerged from our procurement data.

In other words, while we can report some recent and positive data, at the same time there are still a lot of potential problematic loans in many bank portfolios that will threaten the survival of selected small businesses – and demand more write-offs by banks – in future months.